In Roubaix, Pôle IIID will transform Châtellenie into a campus dedicated to design

At the start of the 2023 academic year, the Pôle IIID animation and video game school will have been transformed into a design school. It will be installed in a future campus dedicated to design and creation in the broad sense. A thousand students will be gathered there.

“We are betting on the reconquest of a neighborhood!” “It is, however, today, in front of a wasteland that Antoine Durieu speaks; that of Châtellenie, an emblematic building which has nevertheless been abandoned for twenty years on the border of Roubaix and Tourcoing. But in three years, instead of brambles and ruined brick walls, the founder and director of Pole IIID, the school of animation, video games and special effects, prefers to see 600 students there. Those of his school, but more generally those of the campus where creators will be trained, in the broad sense of the term. “We are going to open the 21st century design school here!” “

Opened in 2003 at Eurotéléport, in Roubaix, where the school still has a part of its premises, Pôle IIID has mainly been present since 2014 at Plaine Images and provides training for 320 students. If the establishment has made its reputation on the three-dimensional image, “for two years, we have opened a 2D animation section, because we have in Hauts-de-France a demand for specialists in this field by animation studios. “

A section dedicated to special effects

Next September, the establishment, passed in 2017 into the fold of the Catholic Institute of Lille, plans to open a section dedicated to special effects; the same area as the ArtFX school which is due to arrive in Plaine Images in September. “Very large productions, many of which are produced abroad, need this very specialized staff. This makes sense for us to take that turn. “

“Design is not only for making chairs! “

Also in September will begin the foreshadowing of what will be “the school of art and design of Lille metropolis”, an establishment which will take advantage of the training already provided at La Catho, at the confluence of 3D creation, AI, the Internet of objects. “Because design is not just for making chairs,” said Antoine Durieu. Pole IIID will eventually become “a school within a school”. It will not abandon its current premises at Plaine Images because the challenge is to welcome “900 to 1,000 students from 2020 to 2026”.

The nerve center will become the Châtellenie site, the future of which will be decided from February and the launch of the architectural competition, in order to develop just under 6,000 m² of premises on the 2,500 m² site. Will the current building be preserved, only in part? The five selected firms have just under a year to return their copies. Antoine Durieu imagines the start of work for the end of the year and a delivery for June 2023.

Until then, next September, as with any construction site, the foundation stone will be laid. But it will be “virtual” with mapping and other special effects. We expected no less. 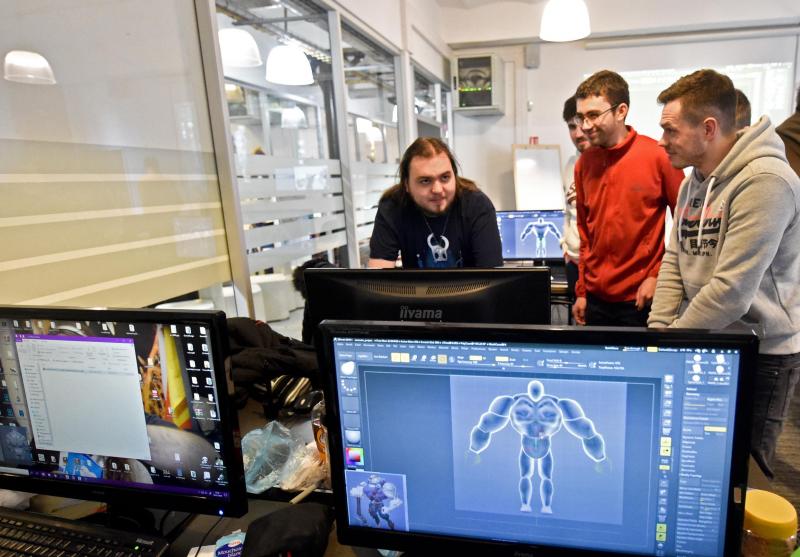 The next school year via Parcoursup

This will be a great novelty for Pôle IIID. Next school year, to become a student at this school, you will have to go through Parcoursup , the platform for admission to higher education. Because up to now, training was carried out by the National Directory of Professional Certifications, therefore by the Ministry of Labor, and entry was made first on file, then via a competition before an interview.

Now (except for the section dedicated to manga), we are talking about university degrees, and therefore about accession via this Parcoursup channel. No more competition, but a pre-selection that will potentially attract candidates from further afield than today. “We can have 3,000 requests for 80 places! “Imagines the director. There may therefore be a lot of people from April 11, the start of the admission interviews.

It was in December that the sale of Châtellenie was concluded with the Catholic Institute of Lille, probably punctuating decades of the desolate soap opera of Châtellenie, marked by legal proceedings. The building, which used to be a hospital, has changed hands several times since 2001. One of the last owners was the social landlord LMH, who planned to set up a home for young workers there, the Oasis.

Residents were very strongly opposed to it and the project had finally collapsed. Another social landlord, Vilogia, who finally bought the building before embarking on a joint project with Pôle IIID and Catho. What does a landlord do on campus? About fifty student accommodations are planned on site. “They can come in their pajamas to their work station,” laughs the school principal. An establishment located at the entrance of Roubaix and Tourcoing and whose installation on this wasteland will restore luster to this sector.

Any cookies that may not be particularly necessary for the website to function and is used specifically to collect user personal data via analytics, ads, other embedded contents are termed as non-necessary cookies. It is mandatory to procure user consent prior to running these cookies on your website.